I suppose can't 100% for sure say it's because of the freshly busted drainage pipe from the Featherlite tract, but a moment ago the bathroom sink in my office began bubbling up with foul water and inexplicably burbling noisily, then spewing small amounts of brown water with little chunks up into the sink basin.

I don't really understand how all the drainage and sewer pipes are hooked up in this neighborhood, and I suppose it could be my own home's plumbing acting up, but it seems like some coincidence that this would start up now, just after a major drainage pipe was broken 30 feet from my house.

Literally I must end this post because sewage is backing up into the shower and Kathy needs me to help deal with it. Meanwhile the water's burbling noisily in my bathroom sink off my office even as I write these lines - I'm afraid to look in there yet to see what needs cleaning up.

Personally, I don't believe this is a coincidence. Here's a picture of the end of 14th street. It was much worse earlier today; this was taken after quite a bit of the water had already receded: 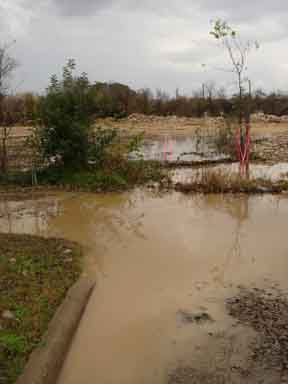 If a tree falls in East Austin and it causes the streets to flood, will anybody hear it?

According to an exasperated and apologetic City of Austin public works official who was just out here by my house, the new owners of the Featherlite tract shouldn't have taken down a huge Cottonwood tree near our property, and they should have known that before they started tearing everything up.

It turns out this was no unreasonable request by environmentalists, though for aesthetic reasons my wife had requested the tree be saved. The previous landowner actually told us they'd adjsted their plans to accomodate it. Then he sold the property and the new landowner started mowing down everything in sight.

Now we discover what City officials already knew - the tree's roots were wrapped inextricably around the drainage pipe that takes in all the water flowing downhill from the whole neighborhood at the end of E. 14th street, which dead ends into the Featherlite tract.

Now, after just a moderate rain, the end of 14th is flooded and backed up into my neighbor's yard. (The damn batteries are out in my camera or I'd have gotten pics.) The drainage pipe is broken, said the frustrated city worker, at this point probably filled in with dirt.

Dellionaire Tom Meredith recently sold the portion of the property between 14th and 16th streets to a partnership between Momark Development (Terry Mitchell) and Benchmark Development (Dave Mahn). They're developing 64 condos on the southern section of the lot where it narrows along Boggy Creek next to the train tracks.

Apparently Momark and Benchmark didn't know about, or care about, any agreement to preserve the tree, the trunk of which is currently laying about 100 feet behind my house beside its giant, upended root system. From a distance, two X's marking it for destruction resemble a smiley face.

More and more I think there will be big drainage problems with the Featherlite, as I've feared from day one. IMO, anyone buying residential property on the southern end of that tract should probably be required to purchase federal flood insurance. The whole neighborhood's drainage used to dissipate into the Featherlite tract or flow down into Boggy Creek. Turn much of it into impervious cover and that seems like a near-certain recipe for flooding.

I'll write more about this subject later as things develop.
Posted by Gritsforbreakfast at 1:48 PM 2 comments:

The weather's crappy in Austin and I really don't like the holiday season - mostly I just hunker down and get through it. But this picture from Veracruz cracked me up. I wish I was there now instead of here. Via Catemaco Noticias.

In case you were wondering, cerdos is spanish for "politicans."
Posted by Gritsforbreakfast at 6:46 AM No comments:

I'm still excited that a theater troupe took over the old Jehovah's Witnesses building in my neighborhood at Cedar Ave. and 12th, and notice they've got a holiday play coming up Dec. 14-23 that I plan to attend, "Abuelita's Christmas Carol." (As I've mentioned previously, you gotta support them if someone is going to launch a theater company three blocks from your house and start with Ionesco.)

It's also good to see the rest of play! Theatre's season filling out. They're having auditions there tonight for another show next spring, I Am Not Tartuffe, billed as a "French-bashing American rock opera" - I'll go see the play when they perform it, but probably pass on stopping in tonight to give a reading.
Posted by Gritsforbreakfast at 11:38 AM 2 comments:

A Rat Done Bit My Sister Nell, and Whitey's on the Moon

So the United States has a long-time twelve-figure deficit, expensive wars in Iraq and Afghanistan, escalating violence by drug cartels at our southern border, millions of kids have no healthcare, our schools suck, their dropouts fill the prisons, New Orleans isn't fixed yet, but the United States is going to spend the money to build a permanent station on the moon?

Does anybody else remember the Gil Scott Heron song referenced in the title? That's been running through my head ever since I first heard this ridiculous news.

Like John Timmer, I wonder what if they built the thing and nobody showed up?
Posted by Gritsforbreakfast at 8:43 AM No comments: 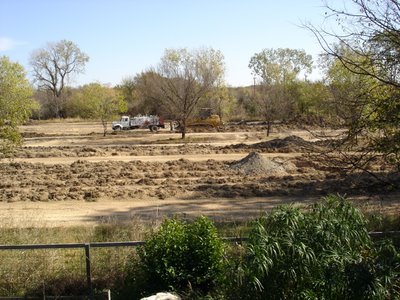 I missed a recent neighborhood meeting to get more details, but they've started tearing up the Featherlite tract behind my house in East Austin this week, making way for new streets, hopefully better drainage (the area floods after a big rain) and several dozen detached condo units with shared parking. This is the view from my back deck of the recently dug up field. I walk my dogs back in that area pretty regularly, so it's a bit of a downer they're digging it all up, but since I've lived here the field's been a dump for garbage, animal carcasses, and once even a murder victim, so I don't have a major beef. Sometimes change is good.

The southernmost area of the property cannot be developed because of drainage concerns, last I heard - I'm surprised that's not true of the part they're developing now along Boggy Creek. Sometimes after it rains big sinkholes show up out of nowhere, up to 3-4 feet deep. That can't be too good for a slab foundation. The section from 14th street to 16th will become condos according to the last information I received, while the northernmost section of the tract will be some type of commercial and lots of parking.

The $64,000 question (actually a lot bigger one than that for Dellionaire landowner Tom Meredith) is whether they can find commercial tenants who want to build next to what will soon become a commuter rail station, where the train tracks cross Martin Luther King, Jr. Blvd. Certainly the site appears more likely to develop after voters last year approved the commuter rail line that will stop right besides Meredith's property. (A cynic might note here that former Dell President Lee Walker chairs Capital Metro, the agency that proposed putting the rail stop there, but I'm sure it's just a coincidence, don't you think?) Several potential anchor tenants like H.E.B. and KLRU originally balked at building on the northern commercial end of the property.

I'm sure those who went to the neighborhood meeting got more detail -I'll try to find out a little more about what's going on and blog it soon. But I thought it was significant that after all this time - nearly two years after they originally announced they would start - construction has finally begun on the largest remaining piece of empty real estatein central east Austin.

UPDATE: A commenter who attended the meeting points to a website put up by the developer about the project, which has been labeled "Chestnut Commons."
Posted by Gritsforbreakfast at 9:19 AM 7 comments: