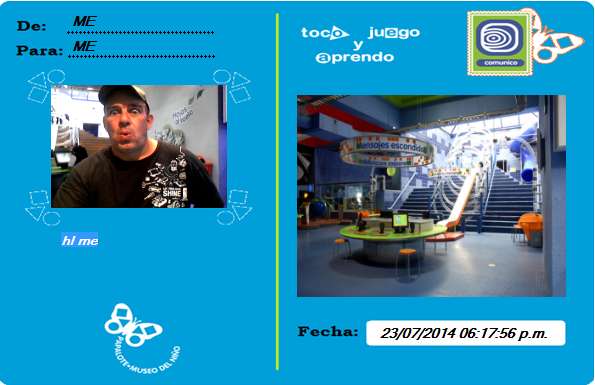 As the grandfather of a nearly eight year old girl who begins a Thinkery camp on Monday, I've spent more than my fair share of time in recent years at children's museums in Austin, Houston, San Antonio and beyond. But the Museo de Niños in Mexico City, universally called El Papalote by the locals, hands down is the best I've seen.

It was big enough and diverse enough that it merited consecutive days visits in a one-week, kid-centric vacation from which I've just returned, an outing that also featured one day visiting the nearby zoo there in Chapultepec Park.

Americans don't think of Mexico City this way, but it's really in many ways a child/family oriented town. Look in most guidebooks and the Museo de Niños may get a one paragraph description, though for families with younger children visiting it's one of the best outings in the city. When we returned to Texas, the first things the child wanted to tell her mother about the trip all were exhibits from El Papalote.

El Museo
El Papalote is much bigger than other children's museums I've encountered. There are several buildings of exhibits, two theaters, three outdoor playscapes for kids of various ages, massive outdoor interactive water features, a food court, and best of all the place is staffed out the wazoo, with a much higher staff to child ratio than I've seen anywhere else, particularly considering the place was packed both days we went. The extra staff made a huge difference. Sometimes when families are around each other too much - like on vacation - children may not always care to listen to the adults closest to them. But the friendly, young staffers with a green vest and big name badges seemed to expertly coax the kids into appreciating and participating in the science themed exhibits.

They did a good job of giving kids something to do in each exhibit. For example, a two story contraption transported 12-inch solid plastic balls up and down from the first and second floor using only kid power from three sources: a hamster-wheel like contraption that powered the drive train and two more areas upstairs where kids reinserted balls from the top, via a hand crank and a game where you balanced the ball on a board around obstacles to get it in a corner hole.

Another exhibit features streams of colored light falling like rain on the wall that seems to slide off the sides of kids' shadows, accumulate within the neck and shoulder or a bended arm. I'm not sure myself how that thing worked, but it was really cool. (The Austin children's museum has an exhibit where they freeze one's shadow on the wall at the end of a countdown, and come to think of it I don't understand how that works, either.) This is a standing feature; it was there when we visited three years ago.

Perhaps the youngun's biggest favorite was a presentation on pressure, showing how one nail may pop a balloon but the presenter could place the balloon on a bed of nails and lean down on it with all her weight without popping it. The point was that the weight was distributed among and thus divided by the total number of pressure points so that any given nail didn't penetrate the skin. They invited kids and parents alike to lay on the bed of nails, which could be raised and lowered through holes in a stiff plastic sheet on a specially built rectangular table top. She was scared at first and didn't quite trust the science she was being told, but "laying on a bed of nails" was right up there among the her highlights from the trip.

The Target Audience
We'd taken the child to El Papalote three years ago during her fourth summer and the differences between a four and seven year old are great. But she found things to do both times - different things interested her, as one might expect - and on both trips she considered it a highlight. By my observation, the more complex exhibits could accommodate kids up to maybe 12 years old; teenagers would probably soon get bored. Or hired. The staff was young, though they did a good job.

It certainly helps the more you speak Spanish. All the instructions are written in Spanish as are the presentations by staff. But if you've got a smattering - in our family, I can get by and the young'un is more fluent than me - there's plenty there to enjoy. And there are a good stock of under-utilized staff wearing "I Speak English" buttons. There are so few English speakers it was like having concierge service. Even so, the excellent service we got because of the novelty of English speakers' presence underscored the extent to which this is a place intended for Mexican children, not necessarily the tourist crowd, which perhaps is why the guidebooks short shrift it.

Getting there
You could take a cab there but I don't always trust them and personally prefer the subways, trolleys and buses for most day-to-day travel when visiting Mexico City. Plus, kids love trains. I looked through a half dozen guidebooks in our hotelier's bookshelf and none of them had good directions to the Museo de Niños, which is a bit of a trek from the main entrance to enormous Chapultepec Park. Here's the best route we found:

Get on the subway from wherever you're staying, find your way to the number 7 (orange line) toward Barranca del Mureto and get off at the Constituyentes stop. As you come up the stairs and out, turn left, go upward, and turn left again, ascending to a green pedestrian overpass that'll get you across a busy road (they'll also sell you a great quesadilla or sandwich on the way, too, I should add). From there, you walk forward past the presidential residence (a day care named Jardin de Niños is on the other side of the street) and just past it on the right you'll see a second, larger overpass that leads you across Ave. Constituyentes  and to the Museo's back door. When you exit the pedestrian overpass, go forward, keeping the yellow building on your left. Walk up the drive and the next left gets you to the main entrance. Avoid the temptation to continue along the highway after the second pedestrian overpass - that way will get you there but add a third of a mile or so to your walk.

Other Logistics
Entry fees are higher depending on whether you see a movie or other performance in their theaters, but the basic entry fees sans movie was about $10 or so (American) per head, so in the scheme of things quite reasonable There's street food all along the path or you can eat inside from decent chain restaurants - some American, some Mexican - in the food court, though even the Mexican versions of US fast food purveyors tend to have menu items one hasn't seen in the states.

One caveat. If you leave between 5 and 7 p.m. on a weekday (the museum closes at 7), you'll hit rush hour when you get to the train headed home. This is doable but potentially stressful and a much different experience than riding around the subway in half empty cars during the day. Small children may need to be picked up to avoid a scary crush when the crowd begins to really pack in. Everything will work out and other passengers will help protect the child if they know what's happening, but I mention it to advise that you prepare yourself and your kid for the experience. Our granddaughter was freaked out when so many people began pouring onto the train and did not stop.

Transportation logistics aside, the Museo de Niños is a great antidote for kids bored by one more trek to visit ancient ruins or who only barely tolerated being dragged through the (wonderful, but grown-up) National Anthropology Museum, also in Chapultepec Park. If you're going to impose a visit to Frida Kahlo's residence, make them view Diego Rivera's wonderful but ghastly murals in the National Palace, or force them to climb the pyramids at Teotihuacan though no one can tell them who lived there, the least you can do is throw them a bone and take your kid someplace that's expressly for them. El Papalote fits the bill.

MORE: I forwarded this post to the contact email for the museum and a gentleman named Daniel Elizondo emailed back to say, in part, that "We know it can be hard to get to the Museum, we are working on different solutions that will facilitate transportation and connection with the rest of Chapultepec." That would be helpful, it's a big place! Two suggestions: 1) Try to reroute or expand the little white train that runs through the park to serve as a de facto shuttle for the Museo, the zoo, and other kid-related stops, and 2) Improve (i.e., install) signage from the Constituyentes metro stop, maybe even spending a little promotions money there. It's only a short walk but unless you know where you're going, the path is not obvious.

RELATED: Other stuff to do with kids in Mexico City.
Posted by Gritsforbreakfast at 7:02 PM 1 comment: