The Mystery of the Lost Library of Congress

This is simply bad-ass, and the Law Librarian blog is right that the story is ripe for inclusion in Nicholas Cage's National Treasure franchise: The Library of Congress' blog has a post on the mysterious disappearance of the contents of the first Library of Congress, most of which was supposedly evacuated prior to the British occupation of Washington, D.C. during the War of 1812. At the time, the Library of Congress was a collection of around 3,000 books but more importantly a collection of priceless historical papers dating to the founding of the republic. The official telling focuses on the books, which were replaced with Thomas Jefferson's private collection, according to the official Librarians of Congress blog:


Less than a month after the fire, Thomas Jefferson came forward and proposed that the United States purchase his collection of 6,487 books to replace the library that was lost. Congress eventually agreed to the purchase, although not without controversy; and in 1815 Jefferson’s library became the foundation of the modern collection of the Library of Congress.

The papers, though, were the bigger loss, and it appears they (and most of the books) were not burned in the fire in Washington but removed before the British invasion and stashed nine miles away, according to a later report to Congress. Here's how the Library of Congress blog retells the tale:


What is rarely remembered, however, is that in the immediate aftermath of the fire, there were conflicting reports about the extent of the damage that was inflicted on the original collection. Writing in 1905, Library of Congress historian William Dawson Johnston cited documents preserved in the Annals of Congress that indicate that much of the first library had in fact been preserved.

The Annals of Congress for September 22, 1814, for example, contains a letter written by the staff members of the Library who were assigned the task of removing the collection to safety in the days before the invasion of Washington: S. Burch (who was furloughed from his post in the militia on August 22 – two days before the fire – so that he might resume his duties at the Library) and the Under-Librarian of Congress, J.T. Frost (who was too old for militia duty). These were the only staff members involved in the evacuation of the Library. The letter was their report to the Librarian of Congress, Patrick Magruder, about the events at the Library leading up to the fire. They write:


“[On Monday, August 22] We immediately went to packing up, and Mr. Burch went out in search of wagons or other carriages, for the transportation of the books and papers; every wagon, and almost every cart, belonging to the city, had been previously impressed into the service of the United States, for the transportation of the baggage of the army; the few he was able to find were loaded with the private effects of individuals, who were moving without the city; those he attempted to hire, but not succeeding, he claimed a right to impress them; but, having no legal authority, or military force to aid him, he, of course, did not succeed. He sent off three messengers into the country, one of whom obtained from Mr. John Wilson, whose residence is six miles from the city, the use of a cart and four oxen; it did not arrive at the office, until after dark on Monday night, when it was immediately laden with the most valuable records and papers, which were taken, on the same night, nine miles, to a safe and secret place in the country. We continued to remove as many of the most valuable books and papers, having removed the manuscript records, as we were able to do with our one cart, until the morning of the day of the battle of Bladensburg, after which we were unable to take away anything further.”

Thus far: two oxcarts were taken away to safety – one full of records and papers, and another containing books and papers. The records and papers appear (in another passage) to have been destroyed in a later fire, one that took place in the safe house; but as for the printed books, Burch and Frost state later in the letter, “a number of the printed books were consumed [in the Capitol fire], but they were all duplicates of those which have been preserved.”  In other words, the better part of the Library had been removed to safety before the fire, including the most valuable books. Frost mentions the successful rescue of the print book collection again in another letter on December 17, 1814, which he wrote in response to public statements made by the Joint Committee on the Library of Congress. The Committee had claimed that the collection was completely destroyed because no preparatory measures had  been taken to expedite its removal. Frost writes, “The several loads [of books] that were saved, were taken from the shelves on which they were placed and deposited in the carts by which they were taken away; they have suffered no injury…”

That account, however, was denied in whole by Brigadier General Duncan McArthur as well as an official "statement of the committee on the Library headed by Joseph Pearson." Could the denials have been a coverup, and if so what might be a possible motive? Could the two men charged with moving the materials decided to act opportunistically? Might there have been a political backstory? (The Law Librarian blog mischeviously suggests as a possible movie-motive that "Jefferson is cash poor and sells his books to Congress because he needs money.") Regrettably, since even the account of the spiriting away of the records says the papers were destroyed in a separate fire at the safe house, one doubts some National-Treasure style adventure might one day lead to their discovery, anymore than I suspect some 21st century Indiana Jones will discover the lost library of Alexandria. But that was all definitely history I didn't know. 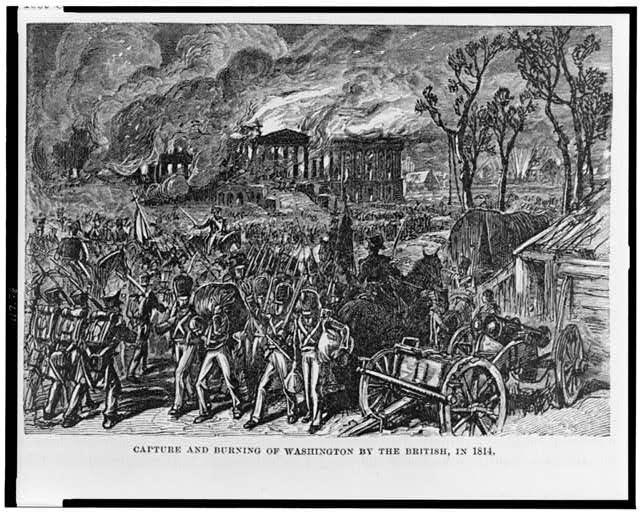 Posted by Gritsforbreakfast at 5:59 AM No comments: