This interesting list of options popped up on Google when I began a search query with "How long does it take to ...":
As it happens, none of those items coincided with my own query, but I thought it was a particularly odd list. Not what I would have expected.
Posted by Gritsforbreakfast at 8:30 AM No comments:

Watching TV, movies from across the Pacific

Kathy and I lately have been watching quite a bit of subtitled Asian TV and movies on Netflix and ran across - arguably, in my opinion - perhaps the greatest (if a quirky and unusual) love story I've ever seen portrayed on film: Castaway on the Moon, written and directed by Hey-Jun Lee. A genius plot, quite well done. Not just every scene but nearly every shot was masterful, emotionally compelling with high impact. It won awards in Asia but I hadn't heard of it: Top-notch stuff. I understand John Waters may be making an American version, but I couldn't recommend the Korean one more highly. Hard to say if the concept will translate.

We also tapped into a recent Korean TV series based on an old Asian cartoon hero called City Hunter, which told the story of an over-the-top revenge plot fulfilled (often against his will) by the son of a man murdered by his government on a secret spy mission against North Korea. The show was fun and compelling as a fan, with each episode ending on 24-style cliffhangers without quite the hokiness of some American thrillers. And the plot was different from most everything on American TV, exciting, provocative, and unexpected, if at moments a bit too sentimental for US tastes.

After watching City Hunter, the missus looked up other stuff done by the same lead actor, which led to a goofy but fun show called Boys over Flowers, which was apparently quite popular in Korea and throughout Asia in 2009. This show is mainly about the pretty boys and their clothes at an elite school where billionaires' kids call the shots and, with the exception of the female lead, the role of female characters is to drool and fawn over the four (admittedly spectacularly pretty) male leads while engaging in catty (sometimes violent) attacks on the heroine. Kathy calls the show "eye candy." So far (we're just a half-dozen or so episodes in), it's barely maintaining my interest, though as a teen love story it's pretty tame by western standards, and a little sappy. Still, the over-the-top class-war laden high-school drama and the always spectacular visuals (it's really made me want to visit Korea) are worth enduring the sappy teenage angst and constant glamor shots. For both City Hunter and Boys Over Flowers, I definitely wish the translations were better. 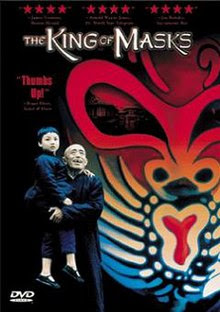 I should also mention a Chinese movie, King of Masks, which featured the most brilliant performance by a child actress (Renying Zhou) I've ever witnessed: Like watching Jodi Foster's child performances, except arguably with even more nuance and emotional control. How this movie failed to compete for awards in the west is beyond me: It was brilliantly conceived, directed and acted. The ending was a tad sentimental, but for American audiences it would actually seem understated given the happy-ending goop sold to audiences here all the time.

We ran across King of Masks by identifying other movies including the actors from Farewell My Concubine, which received more favorable attention in the west than the other movies described here. Farewell My Concubine is a brilliant, epic film depicting the dark interior world of Chinese opera, particularly for children raised in that glorious but brutal tradition, not to mention the absolute awfulness of the Cultural Revolution and its treatment of artists. (The "concubine" in that movie plays a cross-dressing opera star in King of Masks.) Good stuff.

We've enjoyed two excellent Taiwanese movies during this stretch: Snow Flower and the Secret Fan, and Eat Drink Man Woman. These are two very different movies but both focused on the personal lives of women in different eras. The former is set in the 19th century and tells the story of two women bound through decades of personal and political turmoil, while the latter depicts three sisters and their food-centered relationship with their father, an aging master chef. I enjoyed both of them tremendously.

Finally, we've watched two of three parts in the Japanese trilogy, The Human Condition (1959-'61), and are awaiting the third. Some critics have called The Human Condition the greatest movie ever made in any language; they're not far off, certainly for its era. The movie was perhaps the first time the Japanese people confronted in artistic form their nation's brutal totalitarian actions on mainland China during World War II and the implications for their society's ability to integrate into a modern world that respected instead of disregarded values of humanism. Netflix didn't have this one streaming but you can order each part separately through their mail service. So it takes a while to watch it but it's worth the wait.

I'm not sure how much of a market there is in the US for subtitled TV, but the quality of these offerings have been high. I've enjoyed our brief foray into Asian TV and cinema.
Posted by Gritsforbreakfast at 6:48 AM 3 comments: