Yo ho ho and a bottle of rum

Thanks to the presence of my granddaughter, this morning at my house we're celebrating "International Talk Like a Pirate Day," with lots of "Aaaarghs" and "Ahoys" and "Yo ho hos." So in honor of the occasion here's the greatest pirate song ever written, and a really cool, old version of it at that:

Posted by Gritsforbreakfast at 7:25 AM 2 comments:

I just thought I'd post a few examples of cool graffiti we've seen here and there while on vacation. Here's a massive spaceman several stories tall in the Turkish quarter in Berlin: 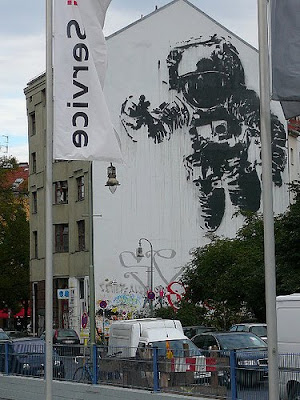 And here's another cool bit of graff covering a metal door of a quite industrial building in Berlin: 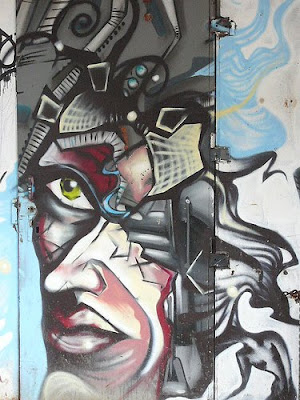 This fun graff can only be seen from the highest point atop Parc Guell in Barcelona, which means only an intrepid few who hike to the top of the mountain ever see it: 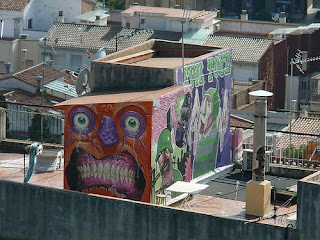 The park below the precipice from which this photo was taken contains several buildings and structures designed by the (astonishing, half-crazed) Antoni Gaudi, which is what most people are there to see.

Barcelona has the largest quantity of high-quality street art of any city I've ever visited. There are multiple books available for purchase featuring literally thousands of photos on the subject and there are full-blown graff murals throughout the narrow, winding streets and on every underpass I've seen. Last night (regrettably we didn't have the camera with us) we ran across about 8-9 excellent murals, all apparently done illegally (you can tell the commissioned stuff because the topic relates to the businesses) painted on the metal doors shop-owners pull down over their entrances when they close up at night. Without question, I've seen art in high-class museums on this trip that I didn't enjoy so much.
Posted by Gritsforbreakfast at 4:18 PM No comments:

One goes to London to see and learn about things that are old - the history, the architecture, religion, etc.. In Berlin, it's alll about the new: New architecture, art, fashion, attitudes. An aura of individualism, youth and cutting edge ideas imbues the city like exotic spices infuse food from the vibrant Turkish quarter of this extraordinarily international town. 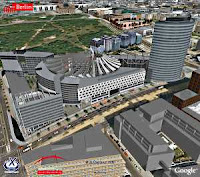 Western developers for years had been eyeing the no-man's land between East and West Germany before the wall fell and and today near what used to be "Checkpoint Charlie" you'll huge, impressive, glass and steel monuments to western capitalism with no trace of the old divisions beyonnd a few out-of-the-way memorials and a bizarre tourist-trap set-up where people get their pictures taken near a mock-up of the old sign, "You Are Now Leaving the American Sector."

This town is full of museums, restaurants, monuments and other touristy spots, but one is most impressed, perhaps, by the city itself - the cosmopolitan crowds, the cutting-edge architecture, and the huge areas of green space everywhere. It's flat as a skillet and perfect for bicycle riding - particularly compared to hilly Austin where biking is great for bulking up your calves but not really a viable way for average people to get around when the weather's hot. While we've been here (in late August and early September) the high temperatures have been in the 60s - a little cold for Kathy but right in my wheelhouse.

Word War II and the Cold War left a scar on this town's psyche which in  many ways still defines the city, if only by what its denizens are AGAINST (which typically defines people much more than what they are FOR.) There's a disdain for conformity and a celebration of diversity and individualism that's striking and rather extreme, even coming from the United States which of course fancies itself the global bastion of individualism. On that score, though, Berlin's got us beat by a country mile. I think it's because the last 20 years in the city have been defined by a reaction against East German/Stasi authoritarism. The folks who brought down the Berlin Wall - and most especially their children, who have never lived under dictatorship - have embraced the "Never Again" slogan, which European Jewry adopted after World War II when establishing Israel, and are building a new Germany here whose values and approach to living is antithetical to Nazi and Communist totalitarian rule. That's an impression from a visitor, not a learned  historical analysis, but it's difficult to otherwise explain the vibrant dynamism we've witnessed in every corner of the city we've visited..

I really like this town. Kathy suggested I might like to come and live here for a while, and (as usual) she's probably right.
Posted by Gritsforbreakfast at 9:33 AM No comments: