Before Christmas Kathy and I visited this exhibit on early Christian art at the Kimbell Art Museum in Fort Worth - described here by the San Antonio Express News - "Picturing the Bible." It was a neat experience I'd highly recommend if you get the chance; the exhibit continues through March 30, 2008.

Nearly all truly ancient Christian art - even after the Roman Emperor Constantine converted to Christianity in the Fourth Century - has been destroyed as a result of later "Iconoclastic" movements bent on destroying images that portrayed the Divine or even humans since they were created in God's image. Countless ancient works were lost to these awful movements, whose motivations mirror those of radical Islamists today who object to portrayals of Muhammad.

We'd gotten to see some of the early Christian art that escaped the Iconoclasts when we were in Turkey, buried in underground temples and chapels carved from caves out of canyons in Cappadocia that to this day one must hike in to see. Many of these drawings in what today is central Turkey (and what in ancient times was "Galatia," as in Paul's epistle to the Galations) were done by monks loyal to St. Gregory, the earliest Christian monastic, who led his followers into the wilderness in central Asia Minor to contemplate God in true, remote isolation. (Some of these images were preserved because they'd become covered with smoke over time, and are only now being restored, often revealing brilliant color preserved by the ash, virtually untouched in more than a millenium. 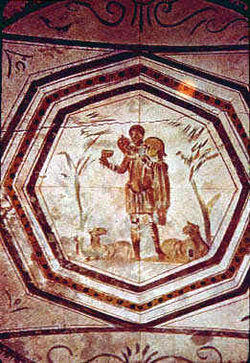 In Fort Worth, though I got to see even older specimens, the most ancient from the catacombs around Rome excavated around the turn of the 19th Century. The paintings on these catacombs dated, at the earliest, from around 200 A.D., and constitute the oldest extant Christian art, nearly one hundred years older (and much more classically Grecian in style) than anything I'd seen before.

Discovered in the 19th Century outside of Rome, the Vatican commissioned what are known as the Wilpert Watercolors, named after Josef Wilpert (1857-1944), a photographer who took more than 600 photos of the ancient tombs and Christian paintings and sculpture inside, in many cases documenting art that was untouched since the graves were closed. The photos were in black and white, but we're incredibly lucky (since much of the art didn't survive excavation) that Vatican scholars had the foresight to commission artist Carlo Tabanelli to take the same photos into the catacombs and paint over them in watercolor to document the exact colors in the original tombs. The result is a 600 page book that must be out of print (I can't find it available online, but we copied the title from the exhibit), called Roma Sotteranea: Le pitture delle catacombe romane.

By far the most common themes from the catacomb art were the Good Shepherd and his flock, Adam and Eve (see the finely detailed ring in the first image above), Noah's Ark and Family, and the story of Jonah and the "great fish," which the ancients saw as directly foreshadowing Christ's resurrection (Jonah three days in the fish; Christ three days in the tomb). Interestingly, unlike today when we think of Jonah in the belly of the whale, ancient Christians believed Jonah had been swallowed by a Keto (at left), or a Grecian sea monster straight out of the Homer and the Odyssey. This early mixing of pagan Greek and Christian symbology was especially striking in light of how our conception of the story of Jonah has changed thanks to modern science and sea exploration.

The Kimbell has hosted some great exhibitions of religious art in recent years, including an exhibit Kathy and I saw in 2003 featuring mediaeval "illuminated manuscripts," and another in 2005 featuring Islamic art (which of course we also saw plenty of in Turkey). I was glad to get to see these excellent pieces, from which I learned quite a bit. Topping the visit off with a walk in the Botanical Gardens (a beautiful, Depression era WPA project) and dinner at the always excellent Realta restaurant downtown, I found the two-day sojourn to Fort Worth last week an enjoyable jaunt, well worth the trek.
Posted by Gritsforbreakfast at 12:23 PM No comments:

There is officially no hope for us as a nation

Posted by Gritsforbreakfast at 6:57 AM 3 comments:

Graffiti of the philanthropic class 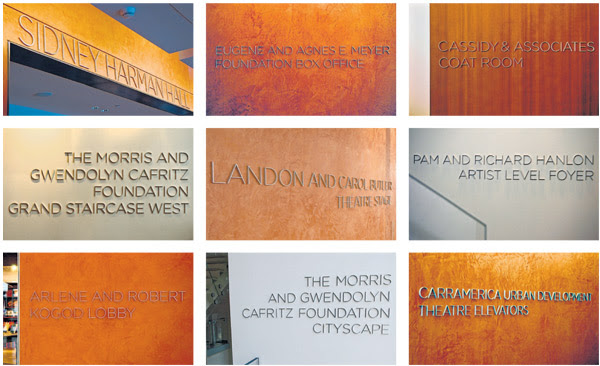 Like taggers, rich folks like to see their names plastered on walls. It's just that they can afford to pay for the privilege, reports the New York Times. That's an interesting way to think about it - philanthropic naming rights as a formalized twist on invited graffiti, compensating the wall owner rather than the artist.

Writer Charles Isherwood wonders "what became of those wealthy philanthropists who used to support arts organizations and other not-for-profit and charitable institutions without requiring that their names be slapped somewhere — anywhere, it sometimes seems — on a building"? Answer: They have mostly succumbed to the narcissistic pleasures of uptown tagging.
Posted by Gritsforbreakfast at 9:07 AM 1 comment: