Baby Ty and the Rhinos

Among the many animals at the San Antonio Zoo that were new to her, my granddaughter saw a rhinoceros for the first time recently and the beast made quite an impression on the 23-month old. Even now, weeks later, if you mention the zoo she'll break in to a babbling description of either the rhino or the monkeys (who got into a fairly energetic and vicious fight while we watched, much to her amazement).

In any event, upon returning home she was so obsessed with rhinos that we got online looking for toddler-appropriate rhino references and quickly found "The Rhino Song," a brilliant little ditty with an accompanying cartoon that she now asks for virtually every time she sees the computer. This is clearly quite popular among toddlers and the adults who cater to them but I just ran across it. Be forewarned: It's addictive:

Posted by Gritsforbreakfast at 5:32 PM No comments:

I've always thought optical illusions are a pretty cool thing, but while it's one thing to manufacture them in drawings, it's another entirely, it seems to me, to enshrine them in sculpture. Here's a piece outside the McNay Museum in San Antonio that appears to have a great deal of depth when viewed from the vantage point of the museum: Here's the view from the opposite side: 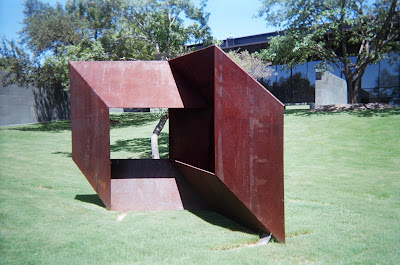 However, here's a side view that shows to what extent the depth you see from the front and back is mostly illusory: 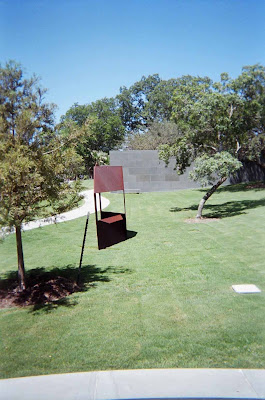 I thought that was a pretty neat piece: the eye projects a lot more depth and complexity to the sculpture depending on your perspective. Here's another remarkable sculpture from the McNay - this one, if I'm not mistaken, from the late Austin sculptor Charles Umlauf set in the museum's fabulous courtyard: 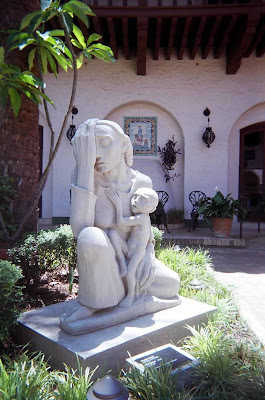 Posted by Gritsforbreakfast at 3:41 PM 2 comments:

If Green Bay can buy the Packers, why can't Austin purchase the Statesman?

When Green Bay, Wisconsin's beloved historic professional football team was about to be sold and moved to another locale, the local community decided they'd rather buy the team than see it auctioned off to the highest bidder. It was a smart move that's benefited the town tremendously, both economically and in terms of prestige and public satisfaction.

So upon hearing news this week that the Austin-American Statesman will be put up for sale, my first reaction, posted as a comment on The Good Life blog, was that:

I think the City of Austin should purchase it and put it in trust with professioal management the way Green Bay, Wisconsin did with their football team. Nobody else who can afford to buy it will do anything but slash it to pieces.

To me, daily newspapers are a national treasure as important to sustaining democracy and public life as water and air are to keeping us all upright and breathing. Certainly blogging would not exist as it does today if bloggers didn't have daily journalists' work to build upon. So-called "citizen journalism" is a good thing, but some projects only get done if you have a pro on the job. Despite the rise of disparate additional media that cut into ad revenues and shrunk the newshole drastically, the Statesman remains the central information source for the largest number of engaged citizens and opinion leaders in Central Texas and a critical spearpoint for public conversation .

I'd personally support a bond issue to purchase the paper and establish an independent trust with its own, dedicated board to manage the project. Public ownership would give the paper many options for distribution and synergy that are closed to a private entity. And a charter for the paper could be crafted that dedicated it to reporting in the public service, bucking the trend of treating news items as entertainment and giving the public better coverage all the way around. If the paper is sold, odds are both staff and the newshole will be further slashed and diminish overall reportage.

The main reason newspapers like the Statesman are losing money is people are accessing their content for free online. So by providing taxpayer support for journalism, purchasing the paper would overcome the "free rider problem" created for papers by web technology.

Besides convincing taxpayers it's a worthy investment, the hardest part of such a deal might be structuring the entity so it's editorially independent - boardmembers couldn't be appointed by the City Council, for example, and remain credibly separate from the city power structure. I don't have a clear idea how that might work, but I'll bet it could be done. The Green Bay City Council, after all, doesn't interfere with the Packers game plans or hiring decisions, and I'll bet there's a way a newspaper could be similarly distanced from outside interference.

Who knows how much Cox News wants for the Statesman or whether it might be possible for the city to purchase the paper? In any event it seems worth considering whether public ownership might be a viable option.

RELATED: See also "Who will buy the Statesman?" from Jeff Beckham, and the Lone Star Times has identified a prospective buyer.
Posted by Gritsforbreakfast at 8:16 AM 6 comments:

Email ThisBlogThis!Share to TwitterShare to FacebookShare to Pinterest
Labels: media

Food notes: An Irish blue cheese adds zing to a salad, Italian ricotta dreams, and perhaps the best steak dinner I've ever had

First, on the home cooking front, I made a spectacular salad two nights ago using fresh spinach greens, a splash of seed-heavy trail mix with raisins and dried cranberries, a spectacular (if expensive) blue cheese from Ireland made from sheep's milk called "Crozier Blue" (see their website for a lot more detail about this cheese and its makers).

The Crozier Blue cheese really made the salad special, though it'd better given the dear price - a whopping $30 per pound at the Central Market, though I just bought a smidgen (at $3 worth), enough to liven up a couple of 2-3 person salads. It would be wrong to call the flavor "mild," though it's not as pungent as some blue cheeses (or as I imagine it might become if allowed to sit and ripen a bit). Indeed, arguably the slightly less brash initial reception the Crozier Blue engenders with the palette creates space for enjoying more fully its rich and complex textures. A good find. I can't afford much of it but it's a good choice for a style of cheese that frequently I pass by as too overwhelming.

Speaking of cheese, I was interested to see an article in a recent issue of Saveur about traditional methods of making ricotta cheese used by shepherds in rural Italy - nearly a dying art form now practiced by septuagenarians whose kids for the most part haven't picked up the family shepherd biz. Turns out Ricotta cheese (ricotta means re-cooked, said the article), is produced from the whey or liquid byproduct from making pecorino cheese, a more expensive and exportable commodity. That whey is used for all sorts of different products by industrial manufacturers, but for shepherds in the mountains its main purpose in the past was to generate a wonderful fresh ricotta that still dominates the region's recipes.

Finally, I'd be remiss not to mention the ridiculously fabulous (and equally expensive steakhouse Kathy picked for her birthday dinner last night - a place called Three Forks at Lavaca and Cesar Chavez catty corner from City Hall.

The meat was as fabulous as any I've been served, clearly of the highest possible quality. My filet mignon came as a three-inch high tower of melt in your mouth tenderloin goodness, perfectly cooked medium rare, while Kathy ordered a rib-eye twice the size of my cut of meet which she entirely devoured. Kathy was so happy with hers she essentially giggled all through the meal.

The side dishes are the same for everyone, so all you pick are the entree', drinks and appetizers, though given the size of the main dish portions there's really no need for the latter. The bread that came before the meal, too, was clearly made on-site and really quite special. With entree's at $35-50, this is a place for special occasions only on our budget, for sure - Kathy just wanted a "good steak" for her birthday so we got her one. It may not be P.C. to say so given the global economics of beef production, but that might have been the best meal I've had in 2008.
Posted by Gritsforbreakfast at 8:23 AM 3 comments: